by Swordplay and Pierre the Motionless 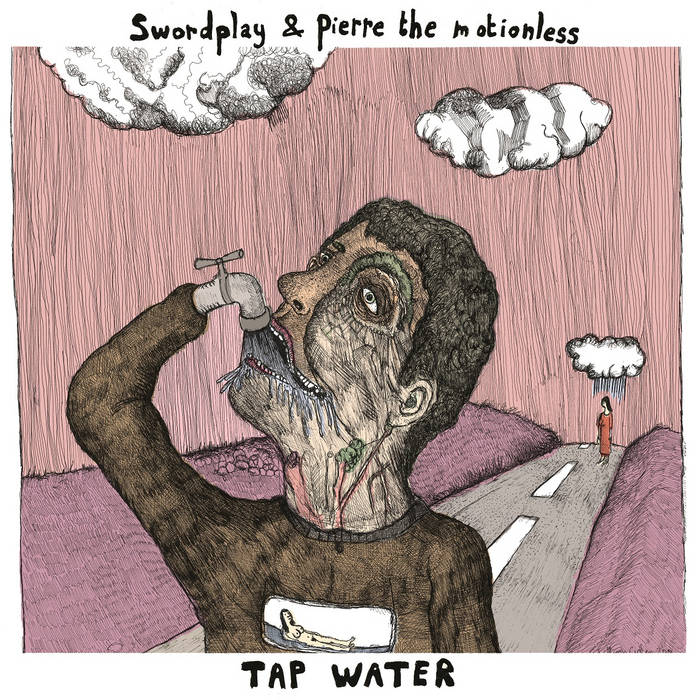 Sladh This album is incredible, the beats fill the lyrics perfectly. I have seen them on live in Paris (L' International), it was really great! I love your work guys, and now I will have your vinyl ... so excited to play it.
Your most faithful fan ;) Favorite track: Conversation Skills.

Dimxsk This is one of my favorite albums in recent memory. The combination of Swordplays singing and freeform poetry style raps, melodic guitar playing, and Pierre's awesome production (check out the posse cut at the end, the beat is SICK) have produced an album that can be adored by fans of alt rap and the casual listener equally, a feat not easily accomplished. There is so much good stuff on here, I found myself returning to this record again and again. It's great, get it! Favorite track: When the Hurricane Comes.

Swordplay and Pierre the Motionless met on the infamous online musician dating site MySpace in its heyday circa 2007. Recognizing an inherent compatibility in both sound and language, the bilingual duo began to craft tracks together, beginning with the remix of 64 Bit from Swordplay’s 2005 Tilt EP and a melodious ode to the relentless lifestyle of touring DIY artists entitled No Sleep. These would be the first two songs written for what has evolved into a long-lasting friendship and collaborative project which has spawned the full-length Swordplay & Pierre the Motionless album Tap Water with the support of French record label Dora Dorovitch.

The music of Swordplay & Pierre the Motionless combines aggressive vocal deliveries with the somber architecture of a beat-maker flirting between jazz and folk.
While still living under the umbrella of underground hip-hop, this unique creature comfortably bends genres, crosses borders and takes no prisoners.

Pretending to be hip-hop for more than ten years now, Pierre the Motionless is actually just some French guy making beats that even your 50 year-old embittered aunt would like. Those who know him will tell you that this beloved father is more emo than first impressions would suggest, and if that doesn’t sound OG enough for you, most rappers call him Papa Pierre. Collaborations with artists like Astronautalis and Thesis Sahib have brought his music to larger audiences across continents, and the release of the full-length album Inertia of an Accent at Rest by his group Motionless was followed by a tour of the US and Canada in 2009. With so many important friends in high places and a considerable amount of theoretically possible gang-activity that they could engage in, it looks like Pierre will not be leaving the world of indie hip-hop anytime soon.

Swordplay, however, is an unpredictable, wild-eyed activist poet and travelling emcee who has even been called Isaac Ramsey by his loved ones on different occasions. Making raps since 2004, Swordplay’s sociopolitical commentaries reveal an avid love for piss and vinegar, and the lyrical content has attracted new audiences in the US who can relate to the themes of corporate capitalism, urban decay, mass disillusionment, love and war. After the release of The Tilt EP [2005] and the follow up album Cellars and Attics [2007], Swordplay departed in 2009 to tour Europe and South America, eventually landing in El Salvador where he spent time teaching creative writing and handmade musical instrument workshops for young artists. Today, Swordplay continues to teach, learn and perform raps relentlessly in his hometown of Richmond, VA, with increasing activity from his mouthy indie rock band Double Rainbow who made their unexpected debut in 2010 with the release of Fuck the Internet.

Written and performed by Isaac Lyons Ramsey a.k.a. Swordplay
www.isaacontheinternet.com

Produced by Pierre De Brouwer a.k.a. Pierre the Motionless
www.pierrethemotionless.com